DEMAND FOR NEW LAND IN PERTH CONTINUES TO RAMP UP

Demand for new land in Perth continues to grow according to the latest statistics released by the Urban Development Institute of Australia (UDIA WA).

The September quarter UDIA WA Urban Development Index has recorded a 35% increase in new land sales for the quarter.

“While the building stimulus measures pushed up sales dramatically last year, we are now seeing a steady increase in demand for new land in Perth due to a range of factors that are boosting buyer confidence,” UDIA WA CEO Tanya Steinbeck said.

“While buyers were scrambling to meet the timeframes for the Federal and State building grants last year, we can see that now that the dust has settled, we have strong underlying demand for new housing that is ongoing even without the incentive of extra cash grants from the government,” Ms Steinbeck said.

“The ongoing rental crisis is also influencing people to buy given that rents remain high and accommodation options are scarce,” Ms Steinbeck said.

While demand for new land is high, Perth remains one of the most affordable cities in the country.

“While it is a positive indicator of our state’s economic success that demand for new land remains high, this does not come without some challenges,” Ms Steinbeck said.

“UDIA WA remains concerned that we are heading for a housing supply crisis, as we outlined in our ‘Housing our Community’ report earlier this year (here),” Ms Steinbeck said.

“Maintaining sufficient housing supply is critical to the liveability of our communities, maintaining the competitiveness of our economy and keeping a lid on affordability,” Ms Steinbeck said.

“Since that report was released, issues that impact the delivery of new land and housing to the market, including skills shortages and material delays are only compounding the challenges,” Ms Steinbeck said.

In terms of specific areas to watch, the latest statistics show that the City of Wanneroo experienced the biggest jump in sales, with the number of new lots sold increasing by 54% over the quarter.

The lift in sales in Wanneroo was predominantly due to sales in coastal areas including Alkimos, Eglington and Amberton.  As well as the popular area of Banksia Grove.

The City of Swan remains the area with most new land sales activity, representing 28% of Perth’s market share and experiencing a 41% increase in the number of new land sales for the September Quarter.

Swan is home to new growth areas such as Brabham and long established estates such as Ellenbrook that continues to attract a range of buyers. 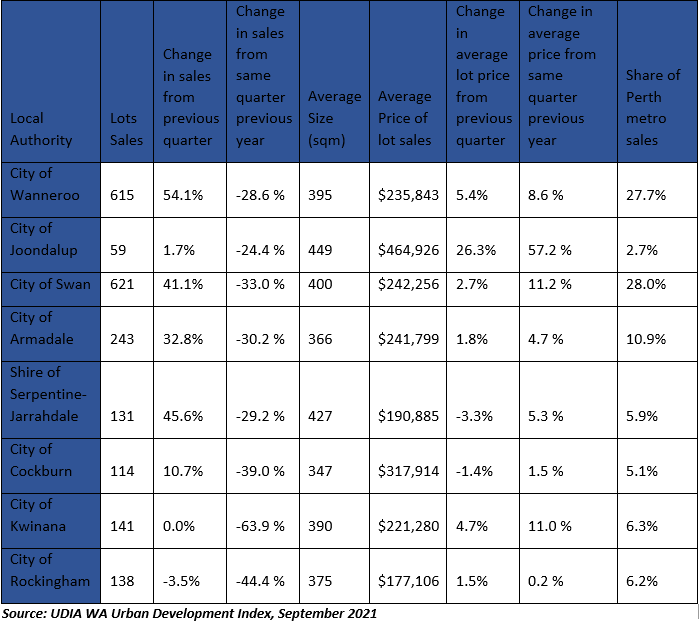